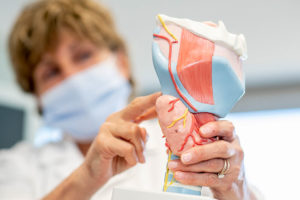 A Cleveland Clinic speech-language pathologist describes the techniques she uses with her patients and how new research reinforces the notion that patients should be driving care decisions. For many transgender women assigned male at birth, voice can be a major source of gender dysphoria. Helping these women align the sound of their voice with their gender identity can be a big step towards gender affirmation. Although gender-affirming voice and communication training is multifaceted, treatment targets may include modifying resonance, increasing speaking fundamental frequency (f0), and work with articulation, prosodic variation/word stress, volume, speech rate, and phrasing. It may also include non-verbal communication as well.

Treatment for gender-affirming voice modification (speech therapy)  is provided by speech-language pathologists (SLP) and in some cases may also involve surgical intervention or a combination of training/therapy and surgery. To better support this patient population, providers at Cleveland Clinic looked at the characteristics and outcomes of patients receiving treatment for gender-affirming voice care for voice feminization as well as which method may be more effective for treatment outcomes of feminizing a voice. Their research was published in Transgender Health.

“We picked two outcome measures,” says Michelle Adessa, BM, MS, CCC-SLP, a speech-language pathologist in Cleveland Clinic’s Voice Center and one of the study’s authors. “The first was a quality of life measure called the TransWoman Voice Questionnaire (TWVQ). We also used speaking fundamental frequency (f0) specifically to look at voice feminization, also recognizing that doesn’t necessarily encompass all of the patient’s experience. We found that whether somebody had surgery or whether somebody had therapy, statistically speaking, outcomes were actually pretty comparable, in terms of the quality of life measures and changes in speaking fundamental frequency.”

Adessa notes that from a statistical standpoint, there wasn’t much difference in the patient groups. The researchers found that increased speaking f0 and decreased TWVQ scores (lower scores indicating more positive quality of life) were evident and statistically significant within the behavioral voice training cohort and the behavioral voice training + surgery cohort. Both of the treatment groups appeared similar with respect to average changes, although pre- and post-data were not available for surgery-only patients, due to limited numbers. However, the greatest change in speaking f0 was directly correlated with an increased number of voice training sessions. “I think what this study adds to the conversation is just a reminder the patient should be driving these care decisions — there isn’t much of a difference in the two outcome measures we looked at in terms of the results,” says Adessa. “So for a patient who doesn’t want to have surgery, they can achieve their goals therapeutically and —based on these outcome measures — the results are on par with patients who have surgery. I think this reinforces the importance of patient preference in terms of their care pathway since there’s not one right way to get a feminine voice.”

For patients interested in gender-affirming speech therapy at Cleveland Clinic, Adessa says she usually meets with them once every other week. This schedule allows her patients to practice some of the techniques they go over on their own. But for patients who express a desire to be seen more frequently because of more debilitating dysphoria with their voice, Adessa says she may see patients on a weekly basis. One of the trends that has made this easier is the increase in virtual visits.

“I see many of my patients virtually,” says Adessa. “Usually I will meet people in person at first, and then we may switch to virtual if that is what the patient prefers. I have so many patients who have completed their courses of treatment virtually. That makes me happy because they can get care that integrates well in their everyday lives. They don’t have to take time off of work if they have limited time off. If they’re in school, they can meet via a virtual visit on their computer. So I think it really does increase access and, that’s a huge barrier for this population I think.”

Many of the techniques that Adessa uses focus on the articulatory component of voice training. Some patients may be really focused on pitch, but there’s an envelope of other characteristics of the voice that they work on with her. So even if the patients have had Wendler glottoplasty surgery (endoscopic suturing of the vocal cords anteriorly to shorten their functional length), and their pitch is already elevated, the goal with Adessa would be to feminize that entire envelope of resonance and articulation, word choice, speech rate and inflection. Many of the techniques that she works on with her patients are for forward resonance — shifting the sound from a throat-focused sound to a more orally focused sound.

“Sometimes we move through different sounds, and they may not know if they like something because they want me to tell them,” says Adessa. “But they are really the ones driving the ship — I work for them. I don’t get to put the stamp of femininity on them. We don’t want to change the sounds of English, but we want to find a way to make them sound lighter. So, I, along with our second speech pathologist, Emma Laurash, MS, CCC-SLP who joined our practice in 2021, really work on how the lips and the tongue and the teeth touch the areas of the mouth and how that coordinates with the airflow. But it’s been amazing to work with my transgender patients, and it’s really just an honor to assist them on their journey. They’re my most dedicated patient group, coming to every session and really the dedication is very obvious — this work is so important to them.”