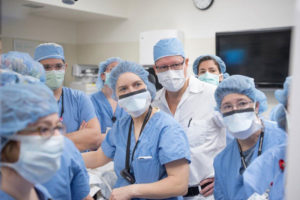 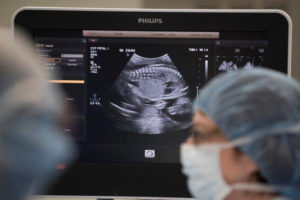 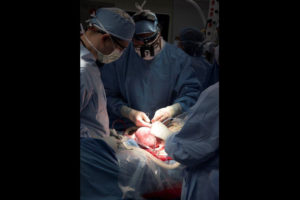 Led by one of the world’s most experienced fetal surgeons, Darrell Cass, MD, a Cleveland Clinic team has successfully performed the complex in utero repair of a neural tube defect in a nearly 23-week-old fetus — a first for northern Ohio.

The baby, a girl, was delivered by Caesarian section near full term June 3. Mother and daughter are doing well. The team has since performed a second successful fetal myelomeningocele (MMC) repair.

Both infants are being cared for in Cleveland Clinic Children’s Neonatal Intensive Care Unit, with discharge expected soon. With the closure of their neural tube defects, both patients’ Arnold-Chiari malformations have reversed, thus decreasing the risk for hydrocephalus and need for shunting. Neurological evaluations are ongoing to determine the infants’ degree of motor functioning, which is expected to improve as a result of the operations.

“I couldn’t be happier with the surgical outcomes and with the performance of the talented multidisciplinary team,” says Dr. Cass, who joined Cleveland Clinic Digestive Disease & Surgery Institute’s Department of General Surgery as Director of Fetal Surgery in 2017 to build a full-spectrum fetal surgery program. Previously, he co-founded and co-directed Texas Children’s Fetal Center in Houston for 17 years.

Dr. Cass trained with the founding fathers of fetal surgery and completed postdoctoral research fellowships at the University of California, San Francisco (UCSF), and the Children’s Hospital of Philadelphia (CHOP).

Those institutions, along with Texas Children’s, are the first three centers globally to conduct successful open fetal surgery for life-threatening congenital malformations. Dr. Cass has performed more than 160 fetal surgeries since 2002 and intends to elevate Cleveland Clinic’s program to world-class status.

“Every case is challenging, but in a way, spina bifida cases are a tiny bit easier than the cases that are life-threatening,” Dr. Cass says. “In addition to improving the outlook for these two babies, it’s been a good exercise for our team to prepare for more complex fetal surgeries, which we expect will come.”

A defect with ‘two-hit’ consequences

MMC, or open spina bifida, is the most common central nervous system congenital defect, occurring in approximately 1,645 births annually in the United States. The condition develops in the first four weeks after conception and is characterized by incomplete neural tube closure and a fluid-filled sac containing an exposed, extruded segment of spinal cord and nerves.

Some initial deficit is due to the primary incomplete neurulation and anatomic abnormality. Subsequently, the exposed neural elements are subject to “two-hit” injury: from mechanical trauma and chronic exposure to toxic amniotic fluid, which structurally damages nerve tissue.

Historically, MMC lesions were surgically closed postnatally, limiting the prevention of neurologic loss. As prenatal diagnostic capabilities and technology (particularly ultrasonography and magnetic resonance imaging) improved, MMC could be detected and characterized as early as the first trimester, raising the prospect of fetal surgical repair.

<p>A real-time ultrasound image of the fetus in utero.</p>

<p>Placing sutures to secure the membranes and myometrium at the start of the hysterotomy. </p>

<p>Drs. Onwuzulike (left) and Recinos work on the multi-layer, myofascial closure of the myelomeningocele defect.</p>

The evolution of fetal surgery and fetal MMC repair

In 1997, MMC became the first nonlethal anomaly to be treated by fetal surgery. A Vanderbilt University team used an endoscopic technique employing maternal split-thickness skin grafts to cover the exposed neural placode in two prenatal patients, with poor results. The use of an open approach and other refinements by the Vanderbilt group and a team at CHOP produced improved outcomes, including reversal of hindbrain herniation and improved motor function in some patients.

The results were encouraging, but lacked control groups for comparative evaluation. In 2003, the National Institutes of Health initiated the multicenter randomized Management of Myelomeningocele Study (MOMS) to compare outcomes between prenatal and postnatal MMC repairs. The trial was halted in 2010 after prenatal surgery demonstrated significant advantages: reduction of ventriculoperitoneal shunt placement, improvement of mental development and motor function at 30 months of age, and reversal of hindbrain herniation.

The MOMS results prompted the American College of Obstetricians and Gynecologists in 2013 to accept fetal MMC repair as a new standard of care option for women carrying a pregnancy affected with the condition. The demand for in utero MMC repair sharply increased, as did the number of centers providing the procedure. “It was the operation that normalized fetal surgery,” Dr. Cass says.

As of 2019, roughly 20 North American medical centers perform select fetal surgeries including MMC repairs, although the majority have yet to attempt the highly complex operations that treat life-threatening conditions.

Readying for the program’s debut

Although Dr. Cass has extensive fetal surgery experience, the preparations were educational.

“I trained at UCSF where fetal surgery concepts evolved; I was at CHOP when that program was beginning, and then I built the program in Houston,” he says. “But it was interesting to visit other centers to see and discuss things they were doing differently. I gave some advice, but I learned some things too.”

Details of the operation

The mother of the patient who would become Cleveland Clinic’s first fetal surgery case presented when her fetus was at 18 weeks’ gestation, with a myelomeningocele lesion extending from L1 to L2 to the sacrum. Determining when to operate is a somewhat subjective decision, factoring in the patient’s gestational age and the potential for cumulative neurological deficit as time passes.

“If you go too early, the fetus is too delicate and complications aren’t as well-tolerated,” Dr. Cass says. “Initially we thought that 22 to 23 weeks was a good time. Surgery in the MOMS trial was done before 26 weeks of gestation. The Fetal Myelomeningocele Consortium sponsored by the North American Fetal Therapy Network is collecting patient data in an effort to determine optimal fetal age for surgery, among other things.”

The surgery took place in February, when the fetus was 22 and 5/7 weeks old. The team felt anxious but well-prepared, Dr. Cass says. In the event of a catastrophic complication, the physicians and the patient’s parents had agreed no resuscitation or delivery would be attempted, considering the small potential for survival and the likely devastating neurological outcome.

To begin, the mother was anesthetized using total intravenous anesthesia (TIVA) rather than inhaled volatile anesthetics, due to concerns about volatile agents’ potential negative impact on the developing fetal brain. The patient was positioned to avoid uterine compression of the mother’s inferior vena cava and obstruction of blood flow, and deep vein thrombosis prophylactics were administered. Maternal and fetal monitoring was initiated using an arterial catheter, ultrasonography and echocardiography.

Although Dr. Cass helped develop a two-port fetoscopic CO2 insufflation technique for MMC repair during his tenure at Texas Children’s, he currently uses an open approach because he considers it the ideal procedure for mother and fetus — reducing operative duration, providing more accurate multilayer myofascial repair of the neural tube defect, and avoiding the potential acidotic and embolic complications of CO2 in the uterine environment.

Dr. Cass used a transverse laparotomy incision to expose and exteriorize the uterus. Drs. Hoyt and Hata deepened the TIVA to relax the uterine muscle. Ultrasound imaging identified the placental margins to guide the uterine incision. It also allowed the surgeons to determine the fetus’s position so they could externally manipulate the baby, to optimally situate its back for the MMC repair. Full-thickness stay sutures affixed the uterine membrane and prevented separation.

Dr. Cass made a 4.5-centimeter uterine incision, using staples to control bleeding and infusing warm Ringer’s lactate to maintain uterine volume and fetal temperature. Although under anesthesia from that given to the mother, the fetus received additional analgesia with an intramuscular injection.

Drs. Onwuzulike and Recinos then performed a multi-layer closure of the MMC lesion. They dissected the placode to release it from the arachnoid membrane, allowing it to retract into the spinal canal, then mobilized and sutured the myofascia, dura and skin. Dr. Cass closed the hysterotomy, re-placed the uterus into the mother’s abdomen, and closed the laparotomy incision. Tocolytics were infused intravenously to suppress preterm labor.

The procedure lasted nearly 4 hours. The mother was discharged after six days and underwent checkups and monitoring until her delivery 14 weeks later.

A great start and a look ahead

Dr. Cass has high praise for his colleagues in the team’s first fetal surgery effort together.

“It’s as good an outcome as we can see anywhere in the world,” he says. “Our anesthesiologists were the best I’ve worked with — cool and confident. Dr. Kalan and the others in maternal-fetal medicine are amazing to work with. Dr. Erenberg did a great job monitoring the baby to make sure nothing went wrong. The repair that our neurosurgeons did was the best I’ve seen, and it was brand new for them. And the nurses, care coordinators and operative team were incredibly dedicated, enthusiastic, well-prepared, and attentive.”

The next steps are to prepare for additional and more complex cases, Dr. Cass says, and to make sure potential patients and referring physicians are aware that full-spectrum fetal surgery is now available in the region.

“I am very excited about the future of fetal surgery at Cleveland Clinic,” he says. “We are leveraging the existing infrastructure of surgical excellence and innovation into this relatively new field to improve the outcomes for all fetuses and children with birth defects.”