IPF is still underappreciated by pulmonologists and primary care physicians. This article attempts to close that information gap by offering clues to diagnosing the disease. 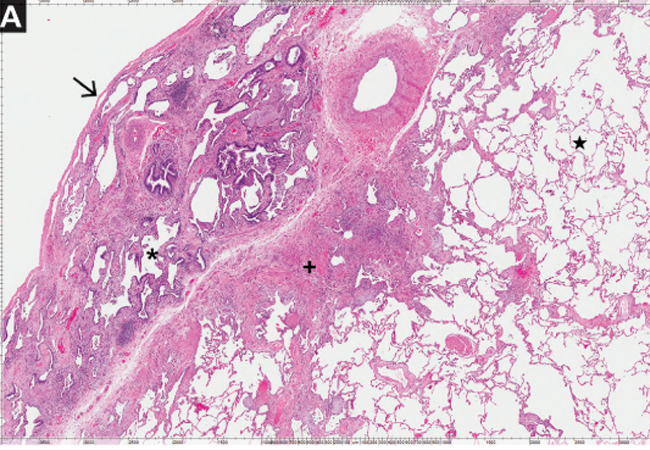 By Leslie B. Tolle, MD, Brian D. Southern, MD, and Daniel A. Culver, DO

Idiopathic pulmonary fibrosis (IPF) is a devastating and fatal lung disease that generally affects older adults. Primary care physicians are uniquely positioned to encounter patients with IPF, whether because of a patient complaint or as an incidental finding on computed tomography. Accurate diagnosis of IPF is crucial.

Usual interstitial pneumonia (UIP) is a histologic pattern observed on surgical lung biopsy specimens, characterized by fibrosis and a “honeycomb” pattern alternating with areas of normal lung parenchyma in a patchwork pattern. These abnormalities are usually subpleural and worse in the lower lobes. Inflammation is not typically seen.

According to the 2011 guidelines, the histology of interstitial lung disease (ILD) can be categorized as definite UIP, probable UIP or possible UIP, or as an atypical pattern suggesting another diagnosis. If no definite cause of the interstitial lung abnormality is found, the level of certainty of the histopathologic pattern of UIP helps formulate the clinical diagnosis and management plan.

On HRCT, UIP appears as reticular opacities, often with traction bronchiectasis or bronchiolectasis, usually with a basilar and peripheral predominance. Honeycombing is a key feature and appears as clustered cystic spaces with well-defined walls in the periphery of the lung parenchyma. Ground-glass opacities are not a prominent feature of UIP, and although they do not exclude a UIP pattern, they should spur consideration of other diagnoses. Reactive mediastinal and hilar lymphadenopathy is another common feature of UIP.

However, evidence is emerging that in the correct clinical scenario, possible UIP behaves similarly to definite UIP and may be sufficient to make the clinical diagnosis of IPF even without surgical biopsy confirmation.

A diagnostic algorithm for IPF

Given the multitude of ILDs, their complexities and the lack of a gold standard definitive diagnostic test, the diagnosis of IPF can be difficult, requiring the integration of clinical, radiologic and, if necessary, pathologic findings.

Multiple pathologic processes can appear as UIP on imaging or lung biopsy, and these pathologic processes must be ruled out before diagnosing IPF. To aid in ruling out other conditions, the American Thoracic Society, European Respiratory Society, Japanese Respiratory Society and Latin American Thoracic Association formulated joint evidence-based guidelines for the diagnosis and treatment of IPF. The guidelines include an algorithm as an aid to the systematic evaluation. We propose a new algorithm that is slightly but not insignificantly different from the algorithm in the joint guidelines. The patient’s demographic features and risk factors dictate the initial clinical suspicion of IPF compared with other ILDs. The incidence of IPF increases with age, and IPF is more common in men. A history of smoking is another risk factor. The finding of ILD in a patient with a demographic profile that is not typical should prompt an exhaustive investigation for another diagnosis such as hypersensitivity pneumonitis or connective tissue disease.

It is also important to identify any environmental exposures that suggest pneumoconiosis or chronic hypersensitivity pneumonitis.

A medication history is important. Many medications are associated with ILD, but amiodarone, bleomycin, methotrexate and nitrofurantoin are among the common offenders. 33

A thorough family history is necessary, as there are familial forms of IPF.

The physical examination must include careful auscultation for rales. While rales are not specific for IPF, they are the most common pulmonary abnormality. Detailed skin, musculoskeletal and cardiovascular examinations are also important to evaluate for rheumatologic signs, clubbing or evidence of heart failure or pulmonary hypertension.

Assessing the patient’s pulmonary physiology should include spirometry, DLCO and body plethysmography (lung volumes). In most cases, IPF manifests with restrictive physiology. Once restrictive physiology is confirmed with a low total lung capacity, FVC testing can be used as a longitudinal surrogate, as it is less expensive and easier for the patient to perform. In general, a lower total lung capacity or FVC indicates more severe impairment.

The DLCO serves as another marker of severity but is less reliable due to baseline variability and difficulties performing the maneuver.

A six-minute walk test is another crucial physiologic assessment tool that can quantify exertional hypoxemia and functional status and can assist in prognosis.

Chest radiography is not adequate to formulate an accurate diagnosis in suspected ILD, and a normal radiograph cannot exclude changes that might reflect early phases of the disease. As the disease progresses, the plain radiograph can show reticulonodular opacities and honeycombing in the peripheral and lower lung zones.

The decision whether to order HRCT in the workup for a patient who has dyspnea and a normal chest radiograph is challenging. We recommend cross-sectional imaging when physiologic testing shows restriction or low DLCO, or when there is a high index of suspicion for underlying lung disease as the cause of symptoms.

Expert consultation can aid with this decision, especially when the underlying cause of dyspnea remains unclear after initial studies have been completed. Otherwise, HRCT is an essential test in the evaluation of ILD.

Although bronchoscopy can be valuable if an alternative diagnosis such as sarcoidosis or chronic hypersensitivity pneumonitis is suspected, the role of bronchoscopic biopsy in the workup of IPF is controversial. The patchy nature of UIP does not lend itself to the relatively small biopsy samples obtained through bronchoscopy.

The favored biopsy approach is surgical, using either an open or a video-assisted thoracoscopic technique. The latter is preferred as it is less invasive, requires a shorter length of hospital stay and allows a faster recovery.

Frequently, neither HRCT nor surgical lung biopsy demonstrates UIP, making the definitive diagnosis of IPF difficult. Moreover, some patients with nondiagnostic HRCT results are unable to tolerate surgical lung biopsy because of severely impaired lung function or other comorbidities.

The role of multidisciplinary discussions

When surgical lung biopsy is not possible, current practice at leading centers uses a multidisciplinary approach to allow for a confident diagnosis. Discussions take place between pulmonologists, pathologists, radiologists and other specialists to collectively consider all aspects of a case before rendering a consensus opinion on the diagnosis and the management plan. If the discussion leads to a consensus diagnosis of IPF, then the patient’s clinician can move forward with treatment options. If not, the group can recommend further workup or alternative diagnoses and treatment regimens. The multidisciplinary group is also well positioned to consider the relative risks and benefits of moving forward with surgical lung biopsy for individual patients.

This approach illustrates the importance of referring these patients to centers of excellence in diagnosing and managing complex cases of ILD, including IPF.

Drs. Tolle and Southern are staff in the Respiratory Institute. Dr. Culver is Director of the Interstitial Lung Disease Program.

This abridged article and the feature image originally appeared in Cleveland Clinic Journal of Medicine.

Image: Histopathologic appearance of definite pattern of usual interstitial pneumonia (UIP), a key feature of idiopathic pulmonary fibrosis. A, dense fibrosis (plus sign) with a “honeycomb” change (asterisk) is prominent at the pleural surface (arrow) juxtaposed against normal lung tissue (star) toward the center of the lung parenchyma (hematoxylin and eosin, × 40).