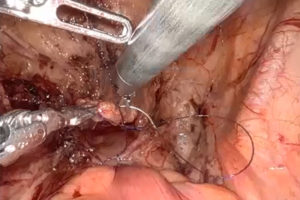 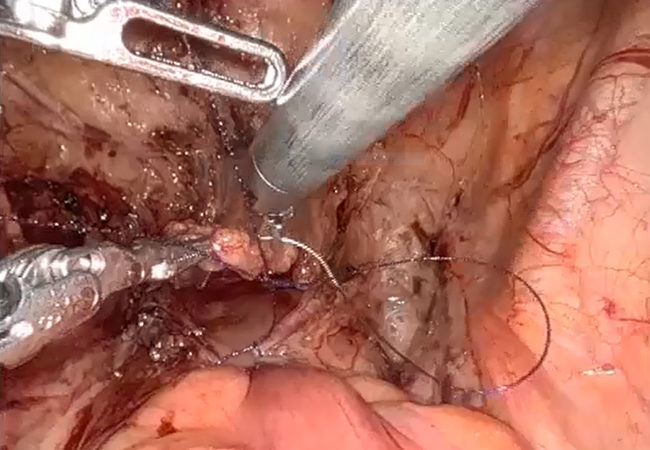 A 54-year-old transgender woman presented at Cleveland Clinic with vaginal stenosis. She was seeking surgical revision after complications from gender affirmation surgeries performed at other care centers failed to establish a functional neovagina.

Four years earlier, the original penile inversion vaginoplasty had left the patient with post-operative bleeding that required two follow-up surgeries. Afterward, she underwent reoperation to manage tissue granulation, and was told she had graft necrosis.

In 2019, the patient underwent perineal neovagina revision with skin grafting, but because of pain and bleeding, she experienced difficulty with post-surgical dilation – a critical component for overall success.

In 2021, she came to Cleveland Clinic, where she was found to have normal vulvar anatomy and a 1.5 cm scarred neovagina with hyperkeritanization and friable granulation tissue. In consultation with Cecile Ferrando, MD, MPH, a specialist in female pelvic medicine and reconstructive surgery, the patient discussed revision options:

After the risk-benefit discussion, the care team pursued the Davydov procedure. This team was composed of two surgeons: one from Urology and one from Urogynecology. The decision was made to perform the surgery in a minimally invasive manner using robotic assistance.

New application for a common surgery

Gender-affirming vaginoplasty has a high success rate and high patient-satisfaction scores, but complications can arise. Those include development of graft necrosis, tissue granulation and scar tissue. Revision procedures are not always successful.

“Problems that emerged after the patient’s first surgery can recur,” says Dr. Ferrando. “The revision also can be challenging because of the need to free the area of scar tissue. There is a six-fold higher complication rate for the revision surgery than for the primary surgery.”

In recent years, a handful of U.S. academic centers have started modifying the traditional Davydov procedure, which for decades has been used to treat female patients with vaginal agenesis. The technique uses peritoneum in the pelvis to create a new vaginal canal. Application of the procedure to rebuild the neovagina in a transfeminine patient seemed straightforward and relatively uncomplicated, Dr. Ferrando says. “I spoke to two colleagues who have done these procedures at their centers, and it seemed like a great, viable option for this patient.”

The surgery involved dissection of the peritoneum and the opening of the apex of the neovagina to a sufficient width and depth. The peritoneum from the posterior dissection then was pulled through the vaginal incision and sutured to the vaginal cuff. Peritoneal flaps were created, then sutured together to form a pouch to serve as the new neovagina.

In this case, the use of robot assistance allowed for optimal access.

“Use of the robot provides complete visualization of the pelvis,” says Dr. Ferrando. “As you’re opening up the space where the old neovaginal graft was, you can monitor the surrounding organs. You can see your dissection plane as it relates to the bladder and to the rectum. When you’re doing the procedure from below, you’re blind to those organs. You rely on your understanding of anatomy, but because there’s so much scarring, things can be distorted.”

The dissection is similar to a robotic prostatectomy, Dr. Ferrando adds. “Surgeons familiar with that dissection can easily do this dissection as well. Georges-Pascal Haber, MD, PhD, interim Chair of the Glickman Urological & Kidney Institute, was able to apply his minimally invasive skill set to perform this dissection for our patient, while I performed the perineal dissection at the beginning of the case, and the reconstruction in that area at the end of it.”

In the case of the 54-year-old patient, the surgery itself was highly successful and without complication. “We created a full length of vaginal canal that had the potential to be functional,” Dr. Ferrando says.

The importance of post-surgical dilation

Long-term success for creating a functional neovagina requires the patient to perform a daily regimen of dilation to maintain the length and diameter of the neovagina and to avoid graft contracture.

Dilators are designed with angled tips so they can be inserted under the pubic bone and varying widths. Patients typically are instructed to insert the dilator three times a day for 20 minutes each during the first 12 weeks after surgery, and to use larger dilators as the regimen becomes more comfortable. From three to six months post-surgery, patients dilate twice daily; from six to 12 months, the recommendation is once a day.

After a year, patients find the schedule they need to maintain the neovagina. “At that point, we say that if it’s easy and doesn’t hurt, that’s your regimen,” says Dr. Ferrando.

While most patients comply with post-surgical protocols, a small number of patients have difficulty, especially in the first six months, for a variety of reasons. “In some cases, the muscles and pelvic floor spasm and cause pain, or they may have bleeding, or granulation tissue develops, which can bleed and be painful,” says Dr. Ferrando.

Psychological factors play a role as well, she adds. Unresolved trauma associated with long-term gender dysphoria can become a barrier. This is especially true if the patient has poor social supports at the time of surgery.

“If you’ve been looked at a certain way, or your family questioned you – this applies to everyone who feels they didn’t get to self-express – these are microtraumas,” says Dr. Ferrando. “If you haven’t been able to work through those microtraumas, they tend to resurface during the surgical recovery period. If you’re not feeling good about yourself, it is sometimes hard to comply with the dilation regimen that has been prescribed.”

These and other factors can make it difficult for some patients to adhere to the dilation plan, and Dr. Ferrando says that “it’s a very slippery slope. If you do not comply one day, it becomes harder the next day, and you do even less. Within a very short time, the neovagina can shorten and become virtually non-existent.”

Maximizing the chance for success

Although dilation ultimately falls to the patient to pursue, Dr. Ferrando says strong communication by the medical team can help increase the chances for long-term success. It starts with conveying to patients how crucial the dilation regimen is, and how quickly patients can lose the benefits of the surgery if they don’t dilate.

“It takes just two or three days of it not going well to start spiraling downward,” she says. “So our care team really stays in touch with our patients, and we tell them not to wait – call us immediately if they are experiencing problems with the dilation.”

In most cases, the team is able to get the patient back on track. Cases of stenosis are not common, and most patients are able to surmount the challenges in order to be able to obtain a favorable outcome in the end.