A combination of brisement, nerve block and immediate physical therapy has become a first-line treatment for frozen shoulder. Some patients recover in weeks rather than months or years, as with conventional treatments. 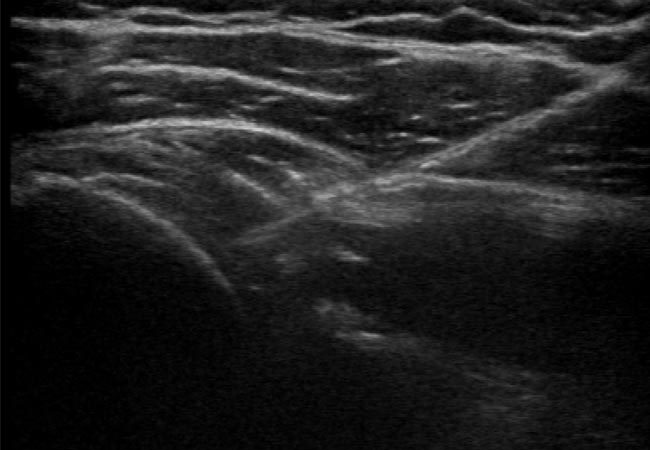 Above: During brisement therapy for frozen shoulder, a needle is introduced into the glenohumeral joint capsule. Ultrasound imaging helps the sports medicine specialist monitor expansion of the capsule as fluid is slowly injected.

Frozen shoulder (adhesive capsulitis) occurs rather randomly in 2%-5% of the U.S. population. The joint capsule adheres to the shoulder joint, causing pain and decreased range of motion. The condition is typically idiopathic but has been associated with diabetes (especially poorly controlled diabetes), some rheumatoid conditions and periods of inactivity (e.g., after surgery).

According to Caitlin Lewis, MD, staff in Cleveland Clinic Sports Medicine Center, there are three phases of frozen shoulder:

“The three phases can occur over 18 to 36 months,” says Dr. Lewis. “If you don’t treat frozen shoulder, it typically does resolve on its own. Treatment just helps it resolve faster and with less pain.”

Conventionally, physical therapy has been the mainstay of treatment, sometimes accompanied by injection of steroid into the shoulder joint to relieve pain. For patients with severe cases, surgical manipulation can release adhesions manually.

Brisement, another therapy for frozen shoulder, involves injecting a large volume of fluid into the joint to stretch out the capsule. It typically uses 20 mL of fluid, including steroid (to reduce inflammation), lidocaine (to reduce pain) and sterile water (to increase volume).

“At Cleveland Clinic Sports Medicine Center, we have begun using a variation of brisement and have seen it provide relief to patients faster than conventional treatments,” says Dr. Lewis. “Some patients recover from frozen shoulder in weeks to months rather than in months to years. For some providers in our center, this variation has become our first line of treatment for frozen shoulder.”

The variation involves applying a nerve block to the suprascapular nerve, to reduce pain during the brisement procedure. Next, brisement is performed, with an ultrasound-guided 20 mL injection into the shoulder joint. Immediately following brisement, the patient undergoes physical therapy manipulation to further stretch the shoulder capsule.

“With this treatment variation, we address both pain and range of motion at the same time,” says Dr. Lewis. “Other frozen shoulder treatments address those problems separately.”

Following this treatment, most patients have an increase in both active and passive range of motion by at least 10 degrees in each direction, she says. That kick-starts the physical therapy regimen to follow.

This treatment variation is best for patients who present earlier in the disease process, in the freezing or frozen phase, when pain and range of motion are at their worst, notes Dr. Lewis. Patients in the later, thawing phase may benefit from physical therapy alone because they are already improving.

Patients with diabetes may experience a rise in blood sugar due to the steroid injection and, therefore, may not be candidates for brisement.

“I used to refer patients for physical therapy first and then perform brisement if necessary,” says Dr. Lewis. “Now I’ve realized that we can expedite the process by combining those steps. This combination treatment has become my first-line therapy.”