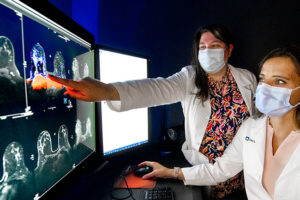 Under current national treatment guidelines, both invasive lobular cancer (ILC) and invasive ductal cancer (IDC) fall under the same category. Yet patients with ILC have a distinct clinical presentation and outcomes compared to their hormone receptor counterparts. This is further evidence that the two diseases require a distinct approach to clinical management, according to a new study published in the Journal of the National Cancer Institute.

As members of the Great Lakes Breast Cancer Consortium, Cleveland Clinic researchers participated in the major retrospective study analyzing data about 33,662 patients with breast cancer treated between 1990 and 2017 at three large clinical centers. The analysis revealed that patients with ILC:

“Our biggest hope is that this kind of study will shed light on the fact that we should be looking into ILC as a distinct clinical entity,” says Megan L. Kruse, MD, study co-author and a breast oncologist at Taussig Cancer Institute. “This data has energized investigators to look for new diagnosis and treatment strategies. In the next few years, we are hoping to open multiple clinical trials to start to address ILC specific issues, including better staging of patients, better monitoring of their response to treatment and ultimately, testing new treatment approaches.”

Some lobular cancers are difficult to find, even with the latest breast imaging. Patients often have non-specific presentation (symptoms such as skin thickening, puckering/rippling or nipple inversion), and may not have a typical mass like what occurs in ductal carcinoma. “If a patient has breast symptoms, the initial mammogram and ultrasound are negative and there isn’t a clear lump in the breast, a clinician may just watch it,” says Dr. Kruse. “But if clinical symptoms persist, sometimes you need to take a step further with evaluation through a breast MRI.”

“It’s essential when a patient is diagnosed with breast cancer to have their tissue samples read by a pathologist who is familiar with ILC,” advises Dr. Kruse. “This is to ensure that we are best identifying patients who need different evaluation or need be identified for participation in clinical trials.” Unlike IDC metastases, which often manifest as solid tumors in other organs, ILC can spread into the lining of organs like the stomach or intestines. If a patient is having gastrointestinal symptoms like persistent, unexplained nausea, vomiting or abdominal pain, a referral for endoscopy may be warranted in light of an ILC history.

One option for some patients with early-stage ILC at high risk of recurrence is a CDK4/6 inhibitor called abemaciclib (Verzenio), which was recently approved by the FDA, as a result of the Monarch E study. When used with hormone therapy, abemaciclib was shown to prolong disease-free survival in patients with hormone-receptor-positive, HER2-negative, high-risk, early stage breast cancer.

“With current early-stage FDA approval of abemaciclib, patients were required to have a high Ki-67 biomarker to be a candidate for the drug, but sometimes patients with ILC have a low Ki-67, even if there is a good deal of lymph node involvement,” says Dr. Kruse. “Thankfully, in the Monarch E study, there was a group of patients who received abemaciclib due to extensive lymph node involvement without having a high Ki-67, so we can use that as justification to get approval of the medication when appropriate.”

Researchers at Cleveland Clinic are looking to understand myriad factors that may influence patient outcomes. One troubling trend they noted was an increase in the size of lobular cancers over time. In evaluating the study population diagnosed between 1990-2017, they found a constant and steady increase in tumor size over the years. “That’s a trend we weren’t expecting that is worthy of future study,” says Dr. Kruse.

Tumor size is just one of the many unknowns that researchers are looking to better ascertain. They hope to use the data sets acquired by the Great Lakes Breast Cancer Consortium to determine if factors such as body mass index or socioeconomics contribute to different outcomes. The three clinical centers that participated in the study gathered detailed information about other medical conditions patients were diagnosed with. This information may provide clues to help researchers better understand ILC risk factors.