Patients with cognitive impairment benefit from physical therapy, which not only can help improve gait and prevent falls, but also serves as a neuroprotector of further cognitive decline. Cognitive decline can be predicted long before the first lapses in memory or behavioral changes. Neurological studies suggest that motor changes, such as a slower gait and other gait abnormalities, represent some of the earliest signs of impending cognitive impairment.

While relatively unknown a decade ago, a growing body of evidence indicates that medical providers may be able to help delay or minimize patients’ symptoms of dementia through prescribed physical therapy and exercise.

“Our neurologists regularly refer patients with cognitive impairment for physical therapy,” she says. “The goal is to increase patients’ strength and balance, ideally improving gait and helping prevent falls — but also to educate patients on the importance of physical activity as a neuroprotector of further cognitive decline.”

Gabriel Léger, MD, a neurologist at the Lou Ruvo Center for Brain Health refers most of his patients with memory deficits for physical therapy. He immediately refers patients who have any type of movement issue as well as those who don’t perform regular exercise on their own. Patients with dementia are at much higher risk for falls, partly due to compromised gait patterns, imbalance and other cognitive deficits, including difficulties with attention.

But gait disruptions or not, every patient with cognitive decline can benefit from physical therapy — for the physical and cognitive strengthening, says Dr. Léger. While the connection between brain health and exercise may be unclear, he says it makes sense.

“Your brain weighs only about 3 pounds — a small fraction of your total body weight — yet it gets 15 percent of your blood flow. Getting your blood pumping, especially if it’s circulating exercise-induced trophic factors, is healthy for your brain,” says Dr. Léger. “Not only that, but moving muscles requires brain power. It makes sense that exercising your body is also exercising your brain.”

A large, randomized controlled trial in Finland, called the FINGER study, also has suggested a connection. In 2015, it reported that healthy lifestyle factors, including exercise, in individuals age 60 to 77 helped prevent cognitive decline later in life.

“The same factors that protect overall health, protect the brain,” says Dr. Léger. “Instead of merely prescribing medication for a patient, I also encourage exercise, healthy diet, brain-stimulating activities, social engagement and other tools to empower them to improve their own future.”

“People with dementia can learn” and improve function

In the neurorehabilitation clinic, Nash and other therapists work with cognitively impaired patients that have slow or unsteady gait patterns — as well as those who don’t.

Tools and techniques range from simple colored floor squares to virtual reality treadmills that can present real-world navigation scenarios and incorporate cognitive challenges. Therapy is tailored to the patient’s goals and current capacity. Episodes of care can last up to eight weeks, with one to two hour-long therapy sessions per week. Episodes recur as determined by patient follow-up.

Mary S. Morrison, PT, DScPT, MHS, GCS, a clinical specialist in Cleveland Clinic’s neurorehabilitation clinic in Avon Lake, Ohio, tells of an 89-year-old patient with cognitive decline who improved her Timed Up & Go (TUG) from 44 seconds to 18 seconds in less than four weeks. TUG is a standard mobility assessment based on a patient’s speed at rising from a chair, walking 10 feet, then returning to the chair and sitting down.

“We’ve been working on ‘stepping big,’ instead of taking little, shuffling steps,” says Morrison. “She’ll walk out of the center with longer strides than she walked in, but we want to help her retain this ability at home to reduce her risk of falling. People with dementia can learn these things.”

Physical therapy helps patients with cognitive disease maintain function longer and at a higher level, she says, which ultimately improves their quality of life.

In an effort to make a clearer connection between exercise and cognitive health, Cleveland Clinic investigator Stephen M. Rao, PhD, is spearheading the IMMUNE-AD (Immunological Mechanisms Underlying Neuroprotection from Exercise in Alzheimer’s Disease) project. Funded by the National Institute on Aging, the project will examine how physical activity counteracts the negative inflammatory effects of the APOE ε4 allele (APOE4), a genetic risk factor for late-onset Alzheimer’s disease.

Physical therapists at the Lou Ruvo Center for Brain Health anticipate producing evidence of their own.

“We’re in the middle of analyzing research data that we collected in 2016 and 2017 to quantify effects of a six-week physical therapy intervention on cognition, walking endurance, physical activity and quality of life in impaired patients,” says Nash.

“About 75 to 80 percent of my patients come back and thank me for insisting they go to physical therapy,” he says. “They claim it makes a difference in their physical and cognitive well-being, and their families concur. Having a sense of purpose — to get up each day and complete an exercise regimen — improves their mood as well. Physical therapy has benefits for almost any patient at any stage of neurodegenerative disease.”

Join clinicians and researchers from Cleveland Clinic’s Center for Geriatric Medicine for discussions of the latest advances in patient care, research, and technology related to the full spectrum of care for the aging population— specifically for healthcare professionals. 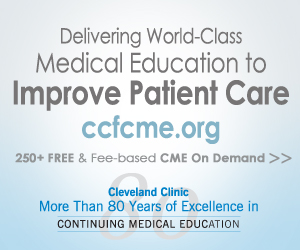