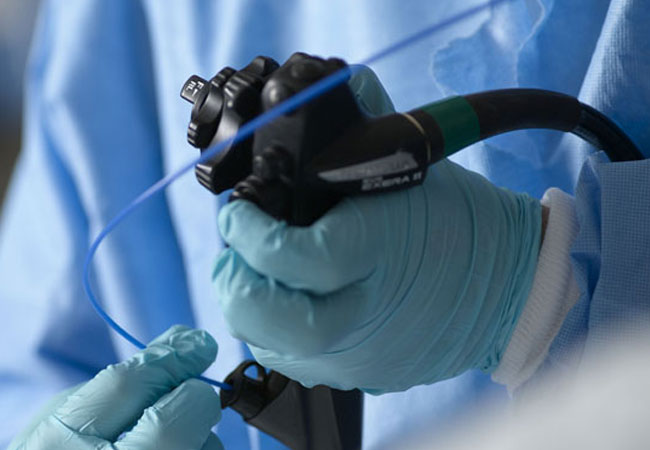 Their preliminary results represent a significant improvement in endoscopic detection compared with previously published detection rates (range: 9-61%) reported with other endoscopic surveillance protocols, including the Cambridge protocol for patients with HDGC.

“We have altered the Cambridge EGD approach and were able to achieve an improved detection rate of SRCC than all of the published literature to date,” says Dr. Burke. “This finding has implications for individuals harboring CDH1 mutations as it may help them with decision making regarding the timing of gastrectomy if they are on the fence about the need for surgery.”

“Signet cells are present under the superficial epithelium of the gastric mucosa and in our study were detected mostly in the pale patches in the upper portion of the stomach (fundus), most frequently on the first EGD exam,” Dr. Burke says, stressing that physicians performing the procedure should be on the lookout for the pale patches.

CDH1 mutation as a risk factor for SRCC

During the last decade, appropriate patients with a personal or family history of cancer have undergone genetic counseling and genetic testing for a broad panel of genes which predispose to cancer rather than testing for one or two genes, which was the traditional approach. The use of cancer panels that cast a wide net to detect genetic variants has led to a higher detection rate of unexpected mutations, including CDH1, which is a hereditary cause of lobular breast cancer and gastric SRCC.

Because the lifetime risk of gastric SRCC in individuals harboring a CDH1 mutation is reported to be as much as 80%, the recommended preventative measure included prophylactic total gastrectomy for patients between the ages of 18 and 40 years. However, certain patients have difficulty grasping the need to have surgery, especially without a family history of stomach cancer.

“When signet cells are detected, it often helps the patient come to a decision about moving forward with gastrectomy rather than continuing EGD surveillance,” says Dr. Burke.

Motivated by the need to improve the detection of early SRCC lesions, Dr. Burke modified the Cambridge protocol for EGD to include more biopsies and use both high-definition white light and narrow-band imaging, to especially look for distinct changes in the stomach mucosa that manifest as pale patches. Esophagogastroduodenoscopy with high-definition white light and narrow-band imaging can reveal pale patches (arrow) in the stomach mucosa. The patches are indicative of early signet ring cell carcinoma lesions and are biopsy targets.

“My approach in our patient population at Cleveland Clinic was to do more biopsies than recommended by the Cambridge protocol (~30),” she says. “I take approximately 77 random biopsies systematically in four quadrants from the prepyloric area to the cardia after performing targeted biopsies of the pale patches and anything else that catches my eye.”

Out of eighteen consecutive asymptomatic patients who underwent EGD using this approach, nine were found to have SRCC. Dr. Burke and colleagues detected SRCC on EGD in 78% (7/9) of patients. Two patients had no signet cells detected on EGD and had early SRCC found on gastrectomy specimen.  Of the 7 patients found to have SRCC on EGD biopsy, 5/7 (71.5%) were picked up on biopsy of a pale patch or subtle nodule and 2/7 (28.5%) were found on random biopsy. In the majority of cases (7/9 patients), the tumor was found in the fundus and in 2 it was multi-focal and located in the fundus and antrum. Tumor staging revealed that all cancers were T1 tumors, which is key, since advanced-stage SRCC is lethal.

The importance of a team approach to diagnosis

Although the modified EGD exam does not require specialized training, Dr. Burke says it is best for the procedure to be performed by a detail-oriented, knowledgeable and experienced endoscopist at a specialized center with a multidisciplinary group who can provide all necessary care for patients with hereditary cancer, such as the Sanford R. Weiss, MD, Center for Hereditary Colorectal Neoplasia at Cleveland Clinic.

“It is really important to carefully seek the pale patches on EGD and partner with high-quality gastrointestinal pathologists who know the importance of a specialized approach to tissue preparation and pathologic diagnosis, because signet cells can be easily missed,” she says. “Caring for patients and families with CDH1 is optimized with a multidisciplinary team that includes genetic counselors, family coordinators, gastroenterologists, surgeons, pathologists, psychologists, oncologists, breast specialists, and nutritionists, like the one we have developed at the Weiss Center.”

In the future, Dr. Burke and her co-investigators plan to study the behavior of signet cells and to work with commercial genetic laboratories and other collaborators to examine the frequency of the CDH1 mutation and identify best practices to manage the gastric and breast cancer risk.

“It is only through collaboration that we can begin to unravel the biology, improve the management of, and quality of life for, patients and families with rare, hereditary gastrointestinal cancer syndromes,” Dr. Burke says.