Some practitioners avoid Botox injections rather than risk blepharoptosis or diplopia. However, data show that injections in the central eyelid and brow areas are a safe option for chemodenervation, Cleveland Clinic researchers report. Fear of the characteristic drooping eyelids of blepharoptosis has prevented many ophthalmologists from injecting Botox®  into the central upper eyelid and brow regions. However, Cleveland Clinic researchers hope their retrospective study on the subject will relieve their concerns.

The study’s findings show that the risk of blepharoptosis is low and the injection practice is safe to use when indicated as a means to achieve clinical objectives in cosmetic procedures and the treatment of facial spasm conditions. “Our outcomes are important,” says Julian Perry, MD, oculoplastic surgeon at Cleveland Clinic Cole Eye Institute and one of the study’s authors. “They change the current paradigm and philosophy on the safety of neurotoxin injection into the central areas of the eyelid and brows.”

Published last year in Ophthalmic Plastic and Reconstructive Surgery, the research involved a retrospective review of the charts of all patients who underwent onabotulinum toxin A injection to the central upper eyelid and eyebrow at Cole Eye Institute over a 10-month period.

“We evaluated almost 88 patients with a total of 300 procedures, so we had a good database to determine the side effects of the Botox injections, such as droopy eyelids or double vision,” Dr. Perry says.

The surgeons also reviewed the amount of neurotoxin injected, the dilution method and all complications recorded.

Surgeons who took part in the research injected a relatively high average amount of neurotoxin into the central upper eyelid and eyebrow regions, in amounts ranging from 2 to 12.5 units per encounter.

Nearly all patients with complications were treated for hemifacial spasm or blepharospasm rather than cosmetic reasons. In 50 brow lifts, there were no cases of blepharoptosis.

“These outcomes are novel,” Dr. Perry says. “They show the safety of injecting Botox into regions many practitioners have avoided.” 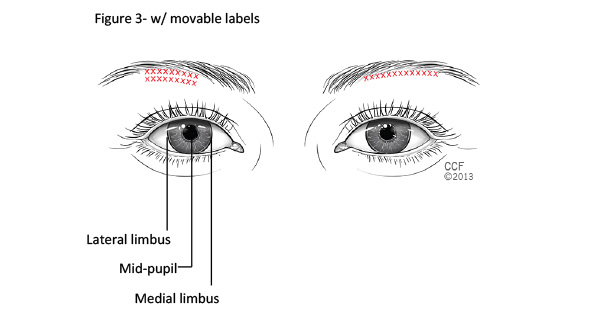 Lack of detailed understanding of the underlying anatomy might account for the unwillingness to make injections into the central eyelid/eyebrow area, he says, noting that there is a significant amount of orbicularis muscle above the central brow.

“Our research, in combination with the anatomic studies we’ve published, could ease their fears and change the status quo,” he says.

Surgeons at Cole Eye Institute have routinely injected neurotoxins into the pretarsal, preseptal and orbital orbicularis muscle of the central upper eyelid for 10 years without noticing significantly increased rates of iatrogenic blepharoptosis, the study notes.