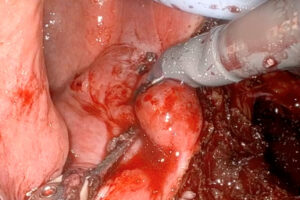 A team of Cleveland Clinic surgical specialists performed a robot-assisted procedure for a patient with a history of cancer and a complex case of endometriosis. The endometrial nodule can be seen in the center.

A woman in her 40s consulted with Cleveland Clinic physicians in the summer of 2022 after several months of cyclic vaginal bleeding. A decade earlier, she had undergone a vaginal hysterectomy following a diagnosis of cervical carcinoma in situ. She also was experiencing severe pelvic pain and pain during bowel movements, as well as feeling a constant need to urinate.

The patient was referred to Mariam AlHilli, MD, who specializes in surgical management of patients with gynecologic cancers. Dr. AlHilli conducted a pelvic examination and felt a firm mass that she suspected was cervical cancer recurrence. A vaginal biopsy revealed no cancer, but did indicate endometriosis. Imaging tests were ordered.

After an MRI indicated the patient had endometriosis involving the perimetrium, bowel, ureter, bladder and vagina, Dr. AlHilli referred the patient to Miguel Luna, MD, director of endometriosis at Cleveland Clinic’s Ob/Gyn & Women’s Health Institute. Based on the imaging results and the patient’s symptoms, Dr. Luna recommended surgery and consulted with colleagues in urology and colorectal surgery.

“This patient had a very severe case of endometriosis requiring a multidisciplinary approach to treatment,” says Dr. Luna. “If she had landed at another healthcare center, other physicians might have assumed she had cancer, which would have led to a delay in diagnosis. The patient was in the right place at the right time and the appropriate referrals were performed.”

Dr. Luna considered medical management of the patient, whose endometrial nodule was slightly larger than a golf ball. However, he concluded that would not alleviate her symptoms and her condition would likely worsen. The nodule had strangulated the patient’s ureter, and she had already lost function of her right kidney.

“We needed this trio of surgeons because the nodule involved the lower urinary tract and the upper rectum,” says Dr. Luna. “It required a comprehensive procedure.”

During the seven-hour robotic surgery, the team members used the same instruments and port placements. Dr. Luna operated first, mobilizing the vagina and excising the pelvic endometriosis and left ovary. Next, he removed the right ovary and transected the ureter on the right side near the nodule, isolating the area where the nodule met the bladder and ureter. He then began mobilization of the rectum before turning over control of the console to Dr. Spivak to complete the task and staple the lower aspect of the rectum to the nodule.

After clearing out the pelvis, the portion of the bowel that was stapled to the nodule was placed in the upper abdomen and Dr. Stein performed a partial cystectomy and closed the bladder. Dr. Spivak then performed an anastomosis of the ends of the sigmoid colon to the lower rectum.

“I can’t think of another place in the world where you could have three surgeons in the room using one robot for seven hours to solve a problem like that,” says Dr. Luna.

The day after her surgery, the patient told Dr. Luna that she had some post-operative pain, but all her symptoms related to the endometrial nodule were gone. She was discharged four days later.

The patient reported no pain or vaginal bleeding at her post-operative appointment. She requires very little hormonal suppression because the surgeons removed both ovaries and did a comprehensive excision. The left kidney is healthy and will compensate for loss of right kidney function. The patient will have a follow-up appointment with Dr. Luna six months following surgery to check for endometriosis, but the prognosis is good.

Dr. Luna encourages his peers in women’s health to listen to patients, consult other specialists as needed and consider a variety of treatment options. When he met the patient highlighted here, she shared a history of painful periods and pelvic pain.

“While vaginal hysterectomy is the preferred route, it’s important to note that in patients with a history of pelvic pain there should at least be a consideration to perform the case laparoscopically so clinicians can see if there is any endometriosis present,” says Dr. Luna. “With the amount of disease our patient had and the things we saw during the laparoscopy, the endometriosis was probably there at the time of her vaginal hysterectomy 10 years earlier.”